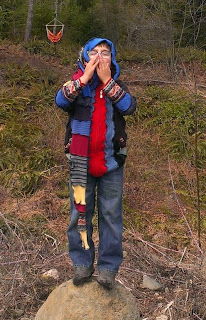 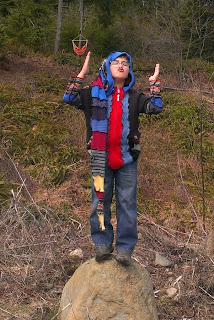 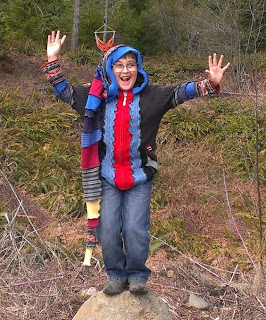 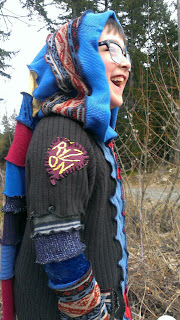 When I was approached by someone from my old stomping grounds of Nanaimo, I was thrilled to be designing the perfect adventure garment for a young lad with a uniquely inquisitive streak.


Ryzon's homeschooling mom, De, responded to his wish for a unique, upcycled sweater after seeing what I magicked up out of recycled knits. Before I knew it, I was in a whirlwind of blue/black/ yellow / red sweater bustle. 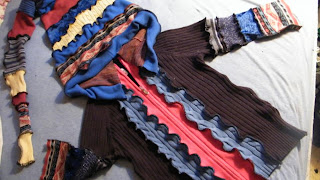 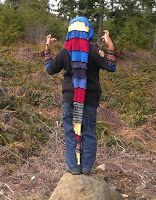 Relaxing into my project, the components appeared at my fingertips as if by magic. I puttered into a few wee hours. The hood had to be as long as Ryzon was tall. His mom said that it will help her see how much he's grown. Two pockets for chilly mornings and damp treasures had to have a little bling too. There's a red streak down the front that mimics the red tie of the 'power suit' and this is my translation of Ryzon's power-with his world, instead of a patriarchal power-over sense of entitlement. As he transitions into his manhood, the cables that flow on either side of the front, emulate the wisdom wreathing eternally around everything for eyes open enough to see it. 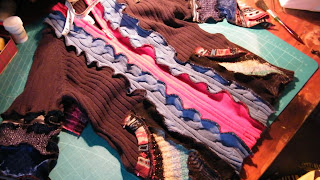 These seams ruffled as I put the coat together and that was the icing on the cake, giving Ryzon's coat an almost organic feel. Mom says that he is very tactile so I took care to have lovely textures next to his face, hands and busy fingers. 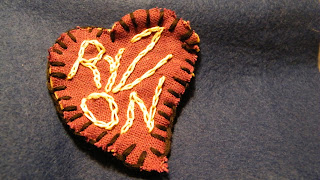 A little felted pocket with Ryzon's name stylized on it found its home on the sweater's shoulder for a super secret treasure that I try to work into every piece I ship out. A few weeks previously, I'd found a 1929 Canadian nickel in my change. I'd looked it up, seeing that it was older than my mom, and found that the collectors valued it from anywhere between $3 to $42.00 depending on its condition. I had a cool 10 year old boy once, and basing my suspicions on my previous experience with my son Daniel, I had a funny feeling that he would enjoy finding this little historical token. I tucked the nickel into a little sweater pouch, snug down into the Ryzon heart.

Later, there was a report that Ryzon's response was a quizzical 'How did she know?' 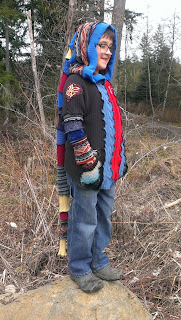 I'm hoping that when Ryzon reads this, he will leave a few words in the comments. I also hope that he will learn that the hood has other qualities. It's a tube, so treasures can be tucked up from the bottom till there is enough room to knot the end, keeping things safe. As well, if you just knot the hood halfway up, this becomes a backbag now, capable of a short term carrying of a snack/book/cellphone/ water bottle or other assorted young lad adventure treasure.

Wear it and be rough with it. Drag it on the ground and use it as a pillow or blanket. Get it dirty, throw it in the wash in a pillowcase and let it dry naturally, just draped somewhere. It's meant to be given the full outback treatment, but do be careful around blackberries and other prickle bushes as snagage is impossible to avoid. It's not pretty. :P Clip threads as they become apparent and bring back to the Sourceress when the sleeves need to be lengthened in the fall.

Mojo Ryzon is a great spring upcycled sweater destined for big adventures and lots of positive magic, all Ryzon needs as he explores the world that unfolds all around him. Sistahoodz for da brudda, Shenaniganstyle in 2013.

Thanks for the terrific experience, Brudda Ryzon!

Sourceress
The online blog that's free of static cling and contains absolutely no artificial flavors. There came a time in my life where I no longer identified as a mother or as a student. I was no longer a programmed sheeple and no longer could see myself as who I'd been all those years. The children grew up, moved on. My degree completed, I found myself moved to another city in order to live comfortably while I got my career off the ground. Now I'm a fledgling textile artist making something that folks are actually clamouring for and its a lovely feeling! I get to play all day doing what I love... at last. And I am going to stick to my guns and make a good living at it... the equivalent or better!